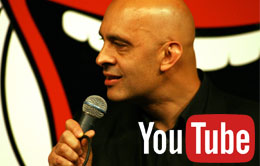 Thinking Of Doing A Comedy Course

Howard Marks is on Tour

I’m not going to Glastonbury festival this year. I haven’t been for quite a few years now. Festivals just don’t seem exciting nowadays. It could be the pervasive mud, the astronomical ticket price or the bland bands. It maybe that I just don’t take the right kind of drugs anymore – I don’t think Statins liven up a festival quite like a few tabs of MDMA.

Strangely, given my past, I’ve never actually taken Ecstasy. It is slightly embarrassing to admit as it is one of the most popular party drugs ever and I never partook. I gave up taking drugs in 1986 just as Ecstasy hit the streets. It was a bloody stupid time to embrace sobriety. All my friends were loved up and I was fuming. In mitigation I can only say that in my youth there wasn’t any Ecstasy. Or XTC as the kids called it – apparently I don’t really know as at the time I was locked in a drug treatment centre talking about my feelings. The only XTC I was familiar with were making plans for Nigel.

In my day the festival drug of choice was LSD and I have certainly taken plenty of that.

Oh yes, I did my time at festivals back in the days when festivals were infragrant gatherings in fields. You know that bloke in documentaries – dancing badly on his own in the middle of a field, a glazed look in his eye, totally oblivious the band left three days ago? That was probably me.

There was none of this highly organised and wrist-banded weekend of music malarkey. There were no middle-class Solicitors from Islington in stupid ethnic hats bringing along little Jocasta and Ptolemy in their Joules wellingtons so they could experience music together in an organic setting. No-one just ‘did’ Sunday because Coldplay were on.

I am talking about the Stonehenge Summer Solstice free festival. During the time when you could walk up to the monument, stroke the Sarsens, embrace the Bluestones and talk shite about feeling the echoes and vibrations of past lives in the sacred landscape. And yes, you read that correctly, it was FREE. No giving a month’s mortgage payment to a ticket agency after registering your interest six months earlier. You just turned up when you damn well felt like it and joined the shindig. It had real bands – Hawkwind, Inner City Unit, Gong, Ozric Tentacles and the 101ers with Joe Strummer. It looked like a cross between a massacre at a Native American reservation and a Hells Angels Convention, tepees, tie-dye, black leather and chrome as far as the eye could see. A month-long, authority free zone. Yep, you read that right. One. Month. Long. None of this only doing a day bollocks.

It was an almost totally lawless environment. People did exactly as they wished. Most drugs were freely available and most people partook. The only exception in this free market was heroin. Even here, heroin was outlawed. One year, someone was foolish (or enterprising) enough to start dealing heroin from a tent, hoping to cash in on this gap in the market. When I passed his tent sometime later in the day, all that was left was twisted, blackened poles and smouldering canvas. The Angels had dealt with him in their own way.

Aside from this strange moral anomaly, like rapists looking down on pedophiles the event was replete with an atmosphere of ‘do what the hell you want and fuck authority!’ Police didn’t venture near the place. One year, two naïve coppers foolishly drove onto the site in a panda car. Within moments they were surrounded by an unwashed, drug-fuelled rabble. Like white cells surrounding an infection. I remember their bemusement turning to panic as their car was over-turned and they dangled upside down by their seat belts. I don’t think they were physically hurt but maybe their pride took a dent as they ran away, shooed like naughty children intruding at an adult’s party. The Stonehenge Festival was wild and exciting, and totally outside of mainstream society. Nothing like the unremarkable blandness of festivals today.

Some years later, when the hedonism police had finally clamped down on the whole free festival thing, I drove past Stonehenge in the early hours of the morning before the summer Solstice. The wind was driving torrential rain across Amesbury and as my headlights cut through the gloom, I was shocked to see Stonehenge surrounded by uniformed police. They had joined hands to form a protective ring around the stones. I have seen some curious sights over the years at Stonehenge, some drug-induced, others real. However the ring of sodden, forlorn policemen, silently holding hands around a prehistoric monument in the middle of the night has to be the most surreal.

When the Stonehenge free festival was axed in 1984, there were scenes on the news of coppers fighting Crusties who were unable to relinquish their annual pilgrimage. It was a sad day but the experiences of Stonehenge festivals changed me forever. It may have been a sudden realisation that authority could be challenged and that I did not have to conform. It may have been the atmosphere, the exuberance of youth, the sense of community and camaraderie that bound together such a diverse group of revellers. Maybe it was the feeling that something big was happening. Or perhaps it was just the experience of spending a month in a field taking drugs. Whichever. I don’t know. I just know that it changed my outlook.

“Mother I can never come home again, as I seem to have left an important part of my brain in a field in Hampshire”

I knew exactly how he felt.

It turned out that Stonehenge was not quite as free from the authorities as I believed at the time. I discovered this about a year later when during a court case the police produced some very clear undercover surveillance photos of me openly dealing speed at the festival.

The innocence of youth.

For me anyway, today’s festivals have lost their attraction. Or maybe I am just getting old and I can’t deal with the toilets.